By sudpbh 0 Comments
This blog is the second in a series written by Sarah Woodman Kansteiner, a former Marine Corps Public Affairs Officer, military spouse, and mom.

When our first FOCUS session occurred, less than two months before my husband’s yearlong deployment to Afghanistan, we were well into the process of “getting ready.” We already had a new power of attorney drafted up, wills had been updated—we thought we had a pretty firm handle on things really. It took our FOCUS trainer approximately two minutes to detect we weren’t quite so far along on the family front. “And how are your kids reacting to the news?,” she asked. My husband and I exchanged an awkward glance and then explained, “well, we haven’t told them yet."

How do you break news like this to little kids? How do you somehow communicate Dad (or Mom) is leaving for a year, and not really going to a safe place? How do you even describe how long a year is to kids whose minds seem programmed to think only in short bursts of time, from what I want this second to what I want the next. If tomorrow is forever, what does that make a year? I had quietly feared we didn’t have the right answers to these questions long before our first FOCUS session. After that first FOCUS session, I wasn’t quite so afraid.

As any military family can attest, the D word is often one that is whispered and tiptoed around when it first enters the house. Eerily like the other dreaded D word, it’s inherently emotionally charged and implies separation and change. It evokes fear, terror even and kids, even little kids, can sense the tension, if only through the concerned facial expressions they see when mom or dad shoos them to another room so they can “talk.” Nobody has told them anything, but that doesn’t mean they don’t know something’s wrong.

We left our first session with ideas and plans for starting this tricky conversation and even titles of a few children’s books to order that were supposed to be very helpful. Our FOCUS trainer didn’t give us a script to memorize or particular lines to say, she just urged us to start talking. She reassured us that the kids didn’t need perfect speeches, they just needed to start hearing about what was about to happen and how it would affect them. This sounds easy, but truly was anything but easy at first. In the beginning, it was hard to even spit the words out of my mouth without my voice trembling. In the beginning, a lot of times I talked about it in the car as I was driving so I didn’t have to literally face the kids and could distract myself by paying attention to the road. This proved to be an excellent tactic especially when the kids would, on occasion, explode or breakdown in fits of crying.

Following our trainer’s advice, I began seeking out opportunities to talk about the deployment, working it into our daily conversations, and I was soon able to talk about it without a catch in my voice. Somehow something that was anything but normal, began to feel more normal, even for me. If we were driving on Camp Lejeune, I would say something like, “okay, so in a month, this is where we will come to bring Daddy and all his bags, and right over there, that’s where we’ll say goodbye to him. And right here, you see this Dunkin Donuts? We’ll go get a donut afterwards, okay? Won’t that be yummy? We’re going to be sad, but, man, that donut will probably taste really good.”

Talking about it in this everyday kind of way helped build the right expectation, while also communicate that life wouldn’t end after we dropped off Dad. And not only would life continue, good things could still happen after Daddy was gone. It certainly wasn’t going to be a “donut every day” kind of deal, but it also wasn’t an “every day is going to suck” kind of deal either.

FOCUS isn’t some magic pill that makes problems go away. Regardless of whether we participated in FOCUS, the deployment was going to happen. I like to think about it this way: The Marine Corps had issued us the dreaded yearlong deployment ticket and on a certain random day our lives would change. Unwanted separation would occur and keep on occurring for a length of time equal to the punishment for misdemeanors in this country. What FOCUS could do, if we were open to listening to some advice, was help us upgrade our tickets from squished, standing-room only accommodations, to actual seats in coach. We were still going somewhere we didn’t intend or desire to go, but how we got there could be changed—made a little more comfortable, a little more endurable. Perhaps we could even pack a few treats for the trip.

We had a tough job, to live life without Daddy, but still with him, and we were just learning how to do this. How to thread a connection from North Carolina clear to Afghanistan, to bridge the terrible gap by adding stitches of daily details—“Cole put his shoes on the right feet all by himself today!” and even, “so I found a dead baby mole in the car today that James was planning on keeping as a pet”—and pulling them taut, effectively shrinking the seven thousand miles between us, at least in our minds. Modern technology certainly helped us do this, but having a licensed professional guiding us along, helping us to interact with our kids more successfully helped as well.

Glazed donuts, in moderation, helped too 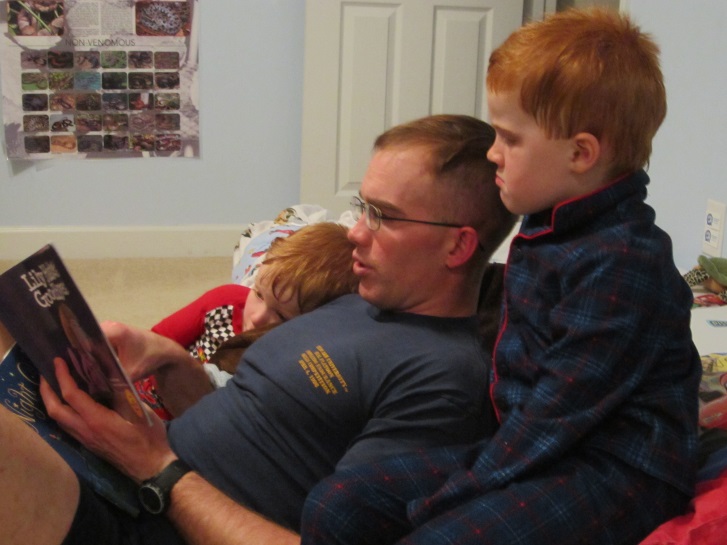